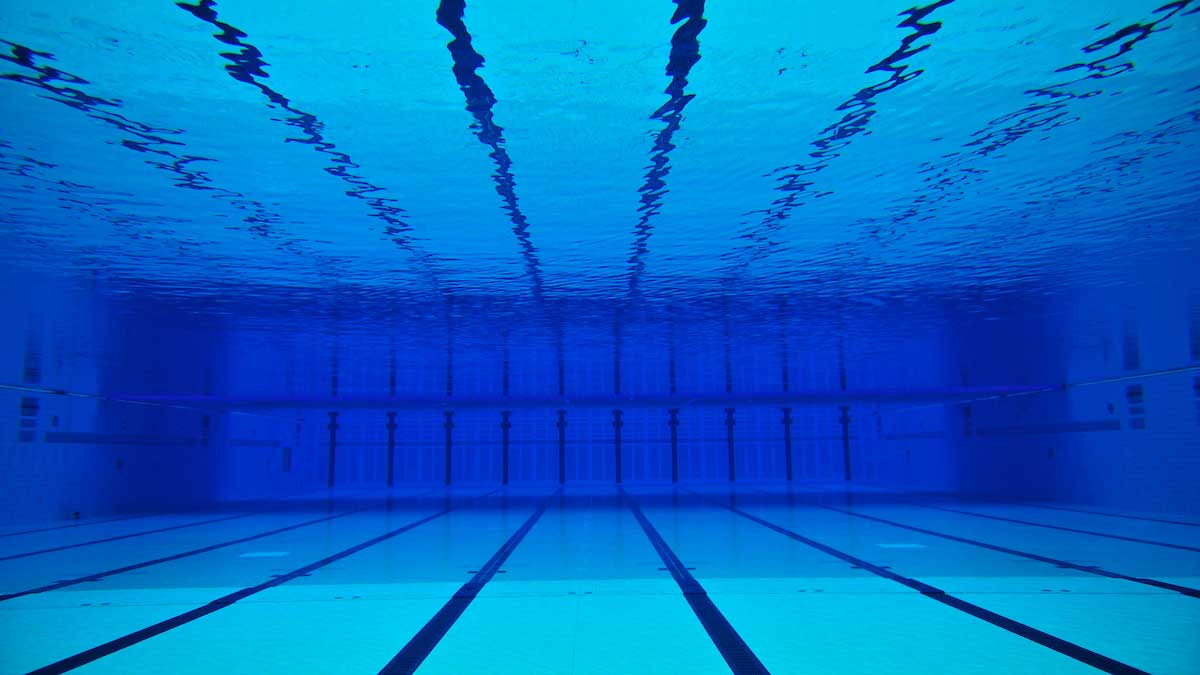 Water threatens human bodies. Many of us love the water, but it’s toxic.

That toxicity is not the familiar water-song that blue humanities scholars, including me, love to sing. Most of the time I’m humming along with Rachel Carson about how the sea is the “great mother of life,” filling up our bodies and overspilling the surface of our planet. But during this dry Covid winter I’ve been cooped up inside thinking about the stresses humans face when confronted with watery environments. Land mammals like humans can’t stay in the water for more than a couple minutes without surfacing to breathe. In between life-giving and drowning floats the deep ambivalence of our encounters with water.

Unable to spend my usual hours in the chlorinated dream-world of my local YMCA pool, I’ve been thinking differently about communal watery spaces. 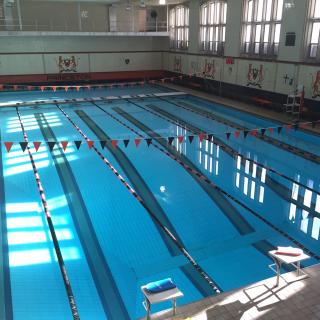 A pool articulates a kind of promise, issues a kind of invitation. Almost-Olympian Leanne Shapton describes how she is “drawn to swimming pools, all swimming pools, no matter how small or murky” (6). When I stand at a pool’s edge, wrapping my pale toes around the rounded bullnose that edges the water, its volume gleams at me like promised transformation, alien and buoyant.

I’m thinking today about a different man standing at the edge of a pool I used to know well. He is decades younger than I am now. He stands tall near the ladder in the shallow end. Voices tell him it’s time to start. Incandescent light slants off the water. The pool fills the emptiness of the gymnasium as a rectangle of light, a reservoir of heat, a stillness. He looks down at the water, and at his bare feet.

He takes a step to climb down the ladder, dips a toe into cool water, looks out across the twenty-five yard expanse toward the deep end of the pool, and – abruptly he leaves the gym.

My college room-mate remains the most gifted competitive athlete I’ve ever known. He grew up in inland Georgia, where he’d been a high school All-American basketball player. The rumor, which he didn’t exactly confirm or deny, was he’d turned down all sorts of offers in order to come to a more academic school in the chilly northeast. The first week we arrived on campus, he walked out of the required swim test. “I don’t really float,” he told me. “I sink.” 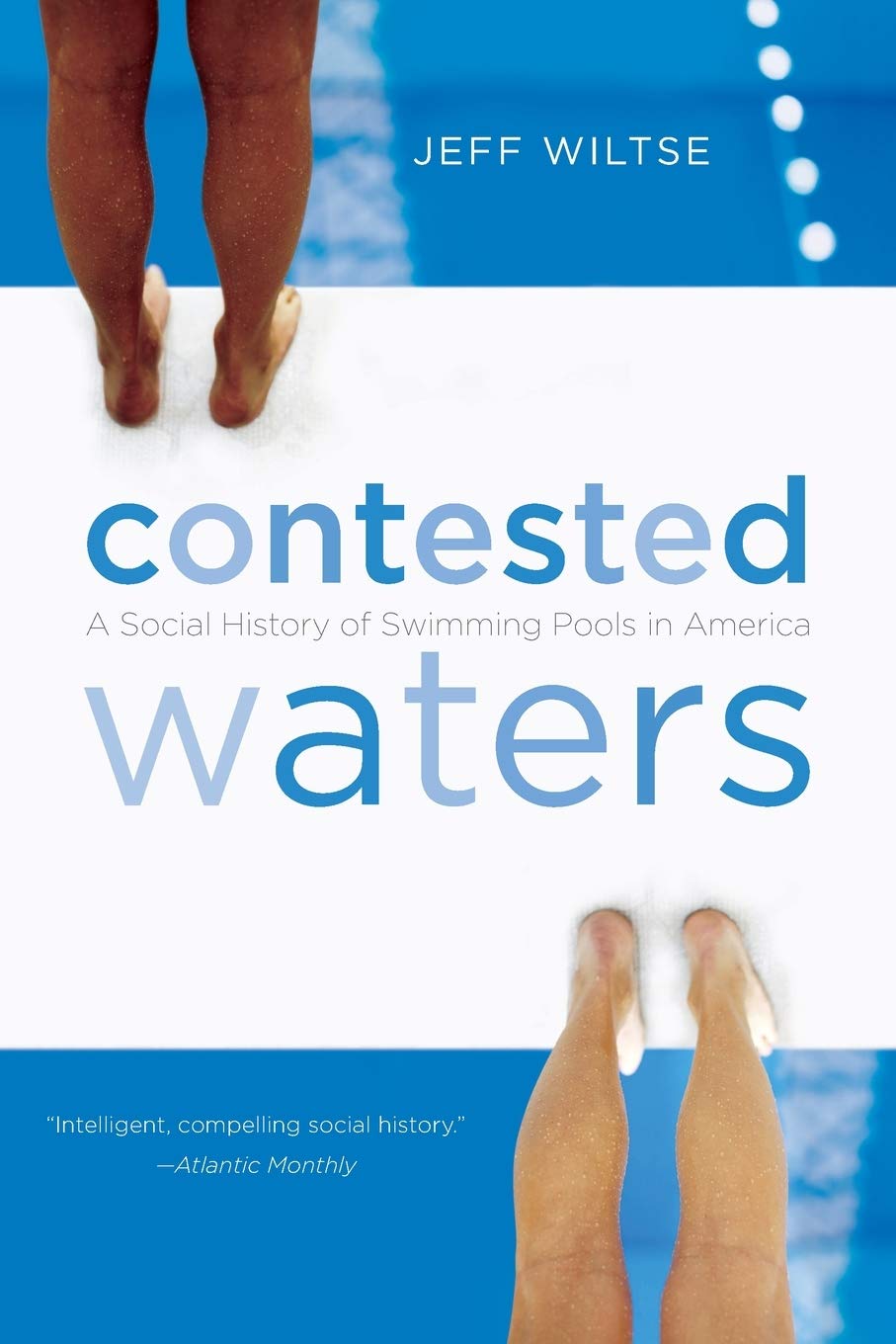 The two of us had been born in the mid-1960s, when struggles over the racial desegregation of swimming pools and beaches comprised a sometimes violent element of the Civil Rights era. Bringing mostly-unclothed bodies together in public spaces often sparked clashes. Legal desegregation paradoxically decreased access to pools for many Black Americans after the 1950s, as communities throughout the United States opted to close or privatize pools rather than open them to all citizens. Jeff Wiltse describes how communities chose to fill in their public pools rather than comply with desegregation orders, leading to “atomized recreation and diminished public discourse” (6). A recent book by political commentator Heather McGhee characterizes this era through the phrase, “racism drained the pool” (The Sum of Us). Being in water and teaching of water-skills, like so many aspects of modern American life, organized itself through exclusion by race and class. Swim-historian Harold Means describes racial mixing in pools as “the last taboo” (208) even today, in public and private settings.

College swim tests became popular after World War II. In general, as in our case, new students were required to swim one length of the pool. As universities expanded their enrollments, swim tests became controversial, because the least likely students to have received swimming instruction often came from poor or disadvantaged communities or were disproportionately racial minorities. Mostly these tests are no longer required today.

During the shortest days of this year’s Covid winter, when I began teaching a graduate seminar on “Black and Blue Theory,” on the intersection of Critical Race Theory and the blue humanities, I asked my students how each of them had learned to swim. I was struck by the variety of the responses. A few students had been taught in classes by instructors, like the ones in which I learned and those I later taught in suburban New Jersey in the 1970s. One student had, like me, been a lifeguard and swim instructor herself. Several students had never received any formal instruction, or had learned haphazardly in a neighbor’s or family member’s backyard pool. At least two or three students described their first immersions as frightening experiences that, despite giving rise to present-day laughter, carried an undertone of terror. To a non-swimmer, water is toxic, dangerous, and unfamiliar.

Thinking today about my room-mate’s anxiety at the pool’s edge in the 1980s underlines the racist structures surrounding water access and swim instruction in late twentieth-century America. I’d grown up swimming and lifeguarding in affluent New Jersey suburbs. It was a shock to me, and a measure of my own ignorance, that my exact peer at the start of my college years, a young Black man from Georgia, would have been denied access to water. I didn’t know then about differential rates of accidental drowning among minority children, nor very much about the racist recruiting structures of the swim teams and clubs that I’d been part of for much of my childhood.

“How do you stay up in the water, Steve?” he asked me. I’d been teaching kids how to swim for the past few summers, so I had an answer ready for that question. “You relax in the water,” I said. “It helps to take a deep breath, so you have plenty of air in your chest to buoy yourself up. You can start by floating on your back, but it’s easier to swim on your stomach. Make sure not to inhale when your face is underwater!”

Teaching by theory is not the best way to support a physical practice like swimming, but he got himself ready to retake the swim test. I was not allowed to come into the gym with him, but as it turned out he didn’t need the encouragement. He told me that it took him a long time to span the twenty-five yards of the pool, but he made it.

That particular lap in that college pool, now over thirty-five years in the past, has been swimming back into my imagination lately. For him, the water was toxic, threatening, and alien. For me, pools always feel completely the opposite. On a non-Covid year I swim more than a hundred pool-miles, each of which comprises sixty-six lengths of a standard US pool. During none of those laps am I as painfully aware of the mismatch between terrestrial mammalian body and watery environment as my room-mate was that long-ago afternoon. When I swim these days – when I go back to pool-swimming post-Covid – I wonder if I’ll be able to remember the water’s toxicity. I know that in my water-rhapsodies I don’t think enough about the thousands of Americans who die by drowning every year, even though I spent long hours working as a lifeguard and water safety instructor. Water is toxic, but I mostly forget that when I jump in. Excluded from the pool by circumstances this winter, I’m thinking about it now.

SWIMMING OUT OF AFRICA 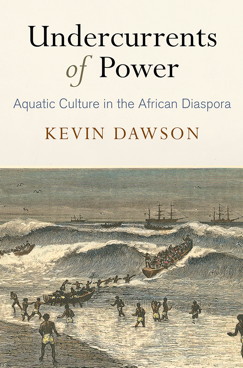 That two American boys should arrive at the same college campus in the mid-1980s with the white boy comfortable in the water and the Black boy not speaks to racist fissures and inequalities in the United States. But it wasn’t until recently, as I’ve learned more about the global history of swimming, that I realized the full irony of that poolside moment. As historian Kevin Dawson describes in his book Undercurrents of Power, early modern Africans had much greater abilities in and around the water than did Europeans. “From the fifteenth through the late nineteenth century,” Dawson writes, “the swimming and underwater diving abilities of African-descended peoples regularly surpassed those of Westerners” (11). Europeans who travelled to Africa were “amazed by Africans’ fluencies” (15) in the water. Waterskills remained essential to the lives of persons of African descent in the Americas, as in the numerous cases of Black abolitionists who were expert mariners such as Olaudah Equiano and Paul Cuffe. Scholar Paul Gilroy quotes as an epigraph to his influential book The Black Atlantic Frederick Douglass’s description of himself escaping to freedom while “rigged out in sailor style” and able to “talk ‘sailor’ like an ‘old salt’” (1). Maritime skills, including swimming, although Equiano at least did not know how to swim, were important tools through which key Black abolitionist figures freed their persons and advanced their cause. Swimming and sailing would coalesce around mostly-white cultures in twentieth-century America, but that racial division misrepresents global history.

The story of African and Indigenous maritime cultures being dried out by American modernity rings painfully familiar and true. If thirty-five years ago the water in the gym pool seemed toxic to my room-mate but not to me, that bifurcation emerges from the racist history of American swimming. It seems an important project in the present day to redress and repair that history. But as a water-scholar, blue humanities academic, and obsessive swimmer in the twenty-first century, I also recall the relief and exultation that emerged that long-ago day on the far end of the pool. “Steve!” he said to me. “I made it!” It shouldn’t have been as hard as it was. But it’s good to have made it. It’s good get your body from one side to the other. 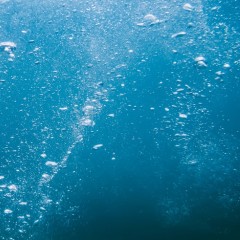 Excerpted from a piece soon to be published in The Deep: A Companion, edited by Simon Bacon (Peter Lang: forthcoming) as part of the Genre, Fiction and Film Companions 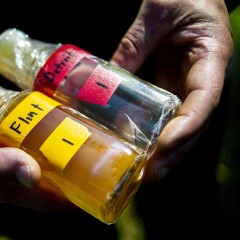 Welcome to "Toxic Times," a multimodal space for reflecting on the materials and metaphors of toxicity in the twenty-first century, a time of unprecedented evolution within the technologies and the 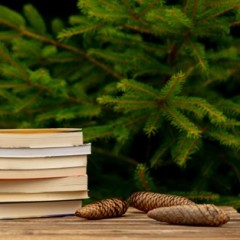 As part of the Houston Diluvial project sponsored by the Center for Environmental Studies (CES) at Rice University, we are inviting contributions to our channel "Toxic Times," an archive of the eve